As the English Premier League kicks off Manchester clubs proved themselves well enough as City won 5 as United dismantled Chelsea 4-0. The clubs dominated the team of the week

De Gea made at least three more saves (seven) than any other keeper, denying Ross Barkley in the first half with a trademark stop with his feet.

His inch-perfect delivery teed up Pierre-Emerick Aubameyang’s fine match-winner at Newcastle having also made four tackles and three interceptions.

Only one player made more interceptions in gameweek one (five), while the 28-year-old won five of six aerial duels.

Only one player won more aerial duels on the opening weekend (eight), while the Irishman also made four tackles and six clearances.

Pieters made a dream start to life at Burnley at both ends. His seven tackles helped the Clarets keep a clean sheet whilst two assists set Sean Dyche’s side on their way to a 3-0 victory over Southampton – making this the Dutchman’s joint most productive campaign for assists in his Premier League career.

Mahrez may not have scored in the 5-0 hammering of West Ham but he did register two assists from four key passes, win a penalty and put in an excellent defensive shift to boot.

It was a hit and miss display from Pogba at times, conceding possession all too often but the Frenchman’s quality showed in the end.
First reserve: Fabinho (Liverpool) – 7.97

The Belgian created three chances in total as well as two dribbles and was defensively sound too, winning four tackles and two interceptions.

Becoming the eighth player to score an opening weekend hat-trick in the Premier League and first since Didier Drogba in 2010, Sterling has started as he’ll mean to go on. First reserve: Marcus Rashford (Manchester United) – 8.33 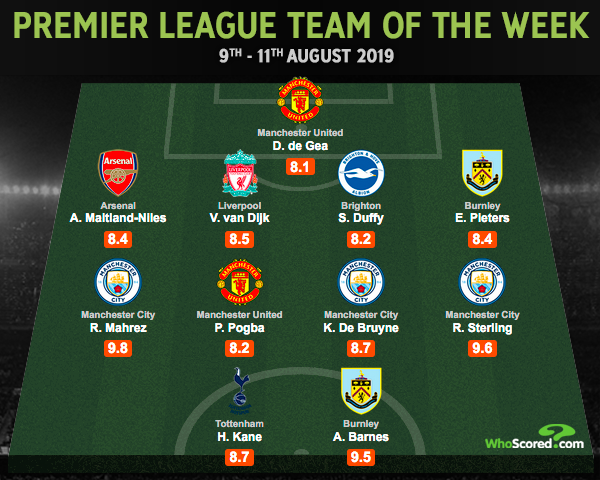 The striker should have levelled the scores just before the break but went one better after it, with two fine finishes to earn all three points having attempted eight shots in total.

Making a fine start to the campaign as Burnley romped to victory over Southampton in the second half, Barnes was on hand to score twice and took both goals very well.

Both Barcelona and Real Madrid reject PSG Bid on Neymar

ICT Cabinet Secretary Joe Mucheru has announced that the government will phase out current National Identification cards by December 12, 2021.

The ICT CS has also added that the IDs will be replaced by Huduma Number where they will start to be issued on December 1, 2020.

The Cabinet Secretary was speaking in Machakos County during the commencement of issuance and distribution of Huduma Namba cards where the CS also stated that countrywide issuance of the Huduma Cards will commence on December 1, 2020.

Children below the age of 18 will receive the Minors Huduma Namba Card while newborns will be required to be registered within 90 days after they are born and receive the cards upon attaining 6 years old where they will use it to enroll in school.

At time, the government had held it was ready to roll out the issuance of the cards but was awaiting the National Assembly to approve the appointment of a data commissioner, Immaculate Kassait. The former IEBC Director, Kassait was sworn in on Monday, November 16.

Following the death of Matungu MP Justus Murunga, which was blamed on the lack of oxygen in local hospitals, Members of Parliament have now demanded the house leadership to facilitate them with helicopters for evacuation in case of a medical emergency.

Hon. Justus Murungu collapsed on Saturday evening at his home in what was suspected to be Covid-19 complications after developing breathing difficulties.

The late MP was rushed to Matungu Sub-county Hospital in Kakamega County, where he was referred to St Mary’s Mission Hospital as he could not be admitted in the facility due to lack of oxygen. His conditioned worsened and succumbed while shuttling between the two facilities.

On Tuesday November 17, the National Assembly eulogised their colleague saying he could have survived had he received better healthcare promptly. Kwanza MP Ferdinand Wanyonyi said, “We are requesting and I have managed to talk to the Clerk of the National Assembly about this, that we be given a hotline number to helicopter services just in case.”

The MPs also pushed for suspension of hotel committee meetings to prevent spread of Covid-19 among MPs and that all meetings should be done within the Parliament premises as the rooms are sanitised regularly and observed by Ministry of Health officials.

Governor Anne Waiguru is fighting eviction from Ksh 80 Million Kitusuru House where she claims to be the rightful owner of the home.

The county boss on February went to court to challenge eviction notice from the landlord arguing she bought the house. Waiguru claims that she paid Ksh 40 million in cash for the house and had an agreement with a local bank to cover the balance of Ksh 40 million through a mortgage.

In the eviction notice, Kihingo Village Ltd, the developer inked a sale deal in September 2015 and asked Anne Waiguru to pay Ksh 80 million or vacate the property by February 29.

The former Devolution Cabinet Secretary claims Kihingo Village Ltd doesn’t have any right to evict her as she is the owner and not a tenant.

The developer has denied receiving payment from the governor saying she is a tenant and not the owner. The developer also claims the Governor has not paid rent for the last five years.

Kihingo Village Ltd, which is owned by ex-Tetu MP James Ndung’u Gethenji and his brother Gitahi Gethenji, wants Waiguru’s assets seized by auctioneers to pay for the rent accrued.

Justice Elijah Obaga issued temporary orders against the eviction and ordered the two parties to solve the rent dispute among themselves. Governor Waiguru through her lawyers has asked the court for permanent orders to halt the eviction.

The hearing has been scheduled for February 2021.